“The power of the Striper Cup to influence striper conservation lies not in the small number of fish weighed but in the big number of passionate anglers who participate. The Striper Cup and StriperFest are proof for the politicians and representatives who make the decisions on how to manage the striped bass fishery that there is a huge community of Northeast fishermen who care deeply about the future of striped bass and are willing to accept conservative regulations to maintain a high-quality fishery.”Chris Megan, Publisher of On The Water 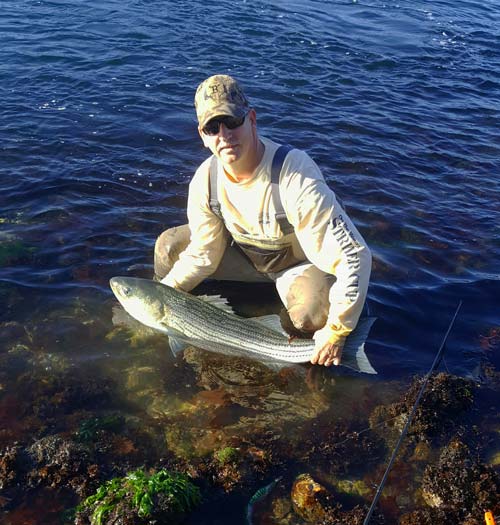 While creating a tournament experience that is fun for striper fishermen regardless of how they fish, we have always tried not to merely reflect the evolving conservation ethic of striper fishermen but to influence it. That is why we have always allowed only 1 weigh-in per week and why we encourage anglers to release fish while they look for their “fish of a lifetime,” awarding a huge number of prizes to an increasing number of participants who enter released fish. And that is why participants are not even required to weigh in a single fish to win the grand prize, a brand-new fishing boat.

Fishermen have embraced these rules, and as a result, in 2017 we received just one striped bass weigh-in for every nine fishermen who participated in the five-month tournament. To put that in different terms, the average Striper Cup participant weighs in one fish every 9 years.

While running a conservation-minded tournament was always an important goal, the power of the Striper Cup to influence striper conservation lies not in the small number of fish weighed but in the big number of passionate anglers who participate. There is great power in those numbers, and in 2014 we were able to wield that power to influence the way striped bass are managed by the Atlantic State Marine Fisheries Commission (ASMFC). In 2014, we supported the most conservative of three management options put forth by the ASMFC, and encouraged On The Water readers, Striper Cup participants, Striper Cup sponsors, and the American Sportfishing Association (ASA) to do the same. (You can read our comment letter here.)

As a result of overwhelming public comment and industry support, the ASMFC required an immediate 25 percent reduction in commercial and recreational striper landings, and most states reduced the recreational bag limit from 2-fish to 1-fish. This management decision was a huge success for striper conservation. However, we must remain vigilant and ready to argue in favor of the long-term health of the striped bass fishery.

It is up to us to make certain that those who decide how to manage the striped bass fishery know that the Striper Cup represents a huge community of Northeast fishermen who care deeply about the future of striped bass.